"Have no fear—the Baloney Festival will still go on, though he’s threatening to set up a tofaloney booth. Either way, the Bratwurst Wagon has been permanently disinvited." It was okay. There were definitely parts I found humorous. I had some irritation with the language and the antics of the main characters. As I said, it was okay for what it was.

"Now it seemed like she could twist the lens on her life and it from two entirely different perspectives." It was a really good story. It speaks volumes to the nature of life. Happiness, grief, disappointment, loneliness, and love all play important parts in everyday life. However they begin to mean so much more when you can't remember your life. Alice is lost in a sea of confusion when 10 years of her life goes missing. The things she learns about herself may just mean the difference between what really is disaster and her happily ever after.

“I knew several women who like doing what I like to do. None of them appealed to me the way you do. I’ve never had an emotional connection with any of them. It’s only ever been you, Ana.” Fantastic look into Christian and his transformation. His prospective of events makes the book more powerful. Ana has a profound effect on him and his fear and determination to be what she needs is amazing. You also get to see how he reacts to her determination to not letting him change the essence of who he is for her. He is really trying to grow past the adolescent phase of life that he’s been stuck in due to “Mrs. Robinson!” Another great addition to the series.

“If I am to continue this new life as an adventuress I may have to train for it.” This is a great introduction to an adult Prudence. I was actually really happy that the book didn’t have Prudence following Alexia around, but rather gave Rue her own adventure. While I would love a book with more Alexia, Conall, and Dama intertwined with Rue, I was very pleased that this first book didn’t do that. I absolutely loved her adventure, although it took a while to get there. It was great catching up with old friends. We get to meet new characters and explore India. Mostly, we learn the apple really doesn’t fall that far from the tree, regardless of which parent you look at!

“Seek the light, Dark One, when chaos and confusion obscure the truth. Keep faith, Dark One, against the tribulations that will raise your doubt. Be true, Dark One, to the one you love most in your heart.” Received a copy from author for honest review.

This was truly a wonderful story. The characters were full of depth and I couldn’t help rooting for them, even ones that you probably shouldn’t. There is a bit of a mystery but it is not the heart of the story. This is a story that goes beyond love and delves into destiny. What does one do when more than your soul is on the line? What would you give to spare the love of your existence pain? Will you give up this life for a chance of meeting again? The painful truth is that these questions demand an answers before destiny can be fulfilled and you won’t know the consequences of your choice until destiny has its way. But the journey maybe just as important as your destination because when living becomes the deciding factor, only what you know to be true can give you the courage to choose. As with all good stories, the ending leaves you with a few questions and several intriguing possibilities. I look forward to what this series has in store next.

"I'm not quite sure how it happen. I don't remember even moving. One second I stood next to Chris. The next, Meredith was flat on her back and I had her pinned to the ground. A bright red splotch spread across her left cheek." Really good book! It was so engrossing that I couldn't put it down. Tessa is a wonderful character. She strong willed and full of life. When her life takes an unexpected turn, she learns that her new path is not only rocky but totally worth the a kiss.

"Think of how you could change it to fit in with the season. Keep it French. Don’t make it blatantly Christmassy. Make it unusual. Make it part of the whole experience. Make it memorable. Make it nostalgic. Make it magical." Cute little story. Quick read. The characters are great. I love the stories of Roksana. Carol hates Christmas, the whole season, but to turn her restaurant around, she has to do something different. Some advice from her mom and the enthusiasm of her partner and staff changes everything. And I do mean everything!

“When I look back into the cauldron, the life is there. I reach in and pull out everything I need to create her, a pink mass of glittering wonder. As I turn her over in my hands, she shines iridescently against the low light of our room.” What a great read. I couldn't put it down. The characters really come to life for me. I love Penn and his internal war. His struggle with what he want and the right thing, puts his life on it's side and then dropped off a cliff. The mystery is so consuming, that I didn't really mind the cliffhanger. I honestly can't wait for Reaper!

"So this won't make sense to you. But for me, it's like we've already been friends for a long time, Beau. The first second you became part of Edythe's life, for me it was like we'd already spent hundreds of hours together." 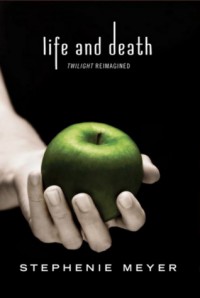 Okay, I had small issues throughout most of it. First, it was the same story, not that I expected to be really different, but I guess I expected more. Especially because it supposed to be a "reimagining". Second, the names changed, the bodies were the same. Thus, it very difficult to picture Beau and Edythe or any other characters because all I saw was those creepy gendered photos, where the male's features are superimposed over the female's body and visa versa. The ending did throw me a twist and since I have always wondered about that, it made me happier with the book. Also, I think Charlie and Renee should have been gender swapped too. Even though Stephenie makes a strong case for why she didn't, there was something wrong when imagining Charlie hanging out with Bonnie and Holly. Not to mention it would have been awesome for Chief Swan to be a woman in this alternate Forks.

"Fuck. The pain in my gut twists and tightens. She's gone, Grey. Get used to it. And drawing on years of enforced control, I bring my body to heel." A whole new perspective on Christian. It takes you through his journey, from control freak to someone who finally wants vanilla. I really enjoyed his perspective and found it to be a wonderful addition to the series.

"This time, the changes came almost too quickly to bear, my Shift fueled by an intense need...To unleash justice on men so like the ones who'd brought a violent end to my adolescence, robbing me of peace and security for years afterward." Great introduction to the new Wildcats series. It is a quick read that sets up the first book, but is a complete story. We met Abby a long time ago in Stray and know Abby has been through a lot. However, as strong as she's become, there is no preparing her for the ordeal a simple fun camping trip turns into. She defies her Alpha, Jace, to prove that she is will no longer be a victim. Nor will she let others suffer like she did not so long ago. Abby proves she more than just a tabby, but that she can be as fierce as Faythe. I can't wait to read Lion's Share and see how the events set up in Hunt play out.

“'I’m sorry,' I whispered to the baby as I crushed the last memory in my hand, knowing he would never hear me, but hoping he would one day forgive me for killing his father.” This was fast paced and hard to put down. Mac is now part of the Unseen, but she is far from emotionally stable. She makes some terrible decisions in light of the tragedy that made her choice to join the Unseen. Then on her first assignment, something goes terrible wrong and even worse the people she loves are in more danger than ever. In a fight that is slowly costing her everything, she has to prove to herself and the enemy who she is once and for all. So excited for Undivided! This was a great read. It starts out slow, lots of character development. Mac is set on her life course and is ready to start life in her chosen career. Then, a terrible first date and unexpected rescue leads her to wonder. A strange secretive organization, a hot guy, and a life changing event lead her to a decision. Filled with quiet a few twists and surprises. Enjoyed it and can't wait for Unforgiven!

“She wouldn’t leave me alone. Kept saying she needed me to tell some guy named Richie that the treasure is buried under the spider oak. It made no sense and she wouldn’t let me sleep, so I finally convinced her to move on to the next plane.” This was a really good story. At the heart is a mystery and in search of answers you learn a lot about Kacie and her life but not enough to loose interest. She is a strong character with lots of potential. I loved most of the characters and enjoyed the pace. It was nice that the story flowed like life and didn't focus 100 percent around solving the mystery! While at the same time it was always in the background. Very well written. There is great potential in the series and I'm looking forward to reading more of the adventures to be had by the Orion Circle.

“Sometimes you have to fight fire with a blowtorch” I enjoyed the story. I tend to figure out mysteries quicker than the main character, but I didn't figure this one out. Goldy, Jullian, Arch, and Tom were great characters and you wanted tgings to work out for them. The recipes throughout the book is an added bonus for those who like to cook. I know I will be tring a few of them myself. I will most likely continue reading Goldy's misadventures in catering.

“It has always been an ambition of mine to serve as an object lesson for others.” For any Mercy fan, this is a must read. While Mercy only appears in one story, all the stories involve characters a true fan would know. You learn Samuel and Ariana story, you learn about how Moria and Tom meet, you get to know how Thomas becomes a vampire, you get to know more about David and his family, and you also get a few outtakes from Mercy books. The collection contains all the previous published shorts from the Mercy Universe as well as few new ones. The only draw back is that if you haven't read both the Mercy and A&O series, you may not know all the characters, but getting to know them will only make you want to read the series more. It was wonderful to spend time with characters that only make brief appearances through the series, but made an impact on the stories in Mercy's world.